pip-frame.el allows displaying a floating Emacs frame with Emacs buffers in EXWM (and possibly other) environments.

Having floating Emacs buffers looking like Picture-In-Picture is still useful. Imagine you start a long compilation and do other work in the meantime. You must poll the compilation status regularly. Maybe the compilation fails early and you don’t notice it until the next polling interval. Or you run an upgrade and forget about it, only to discover a couple of hours later that the upgrade has hung on an interactive question. With a PIP frame displaying the compilation and upgrade buffers, you always know what’s happening.

People often use secondary monitors for such overviews. But this is often overkill. It’s often hard to use all the space on contemporary wide or even very wide monitors. I typically run Emacs with two windows side by side, focusing mostly on the left one. The area close to the right bottom screen corner is the least one used and it’s a good place to place a PIP frame there. And it’s often better than connecting a secondary monitor.

In theory, it’s possible to create such a window in a standard Emacs frame. But having a corner window is impractical, considering applications changing window layouts (e.g. Gnus). And if workspaces are used, e.g. Emacs tabs, the window is still hidden when working in a different workspace. Similar problems are experienced when using tiling window managers other than EXWM.

This is an example of an Emacs buffer displayed in a PIP frame using this utility: 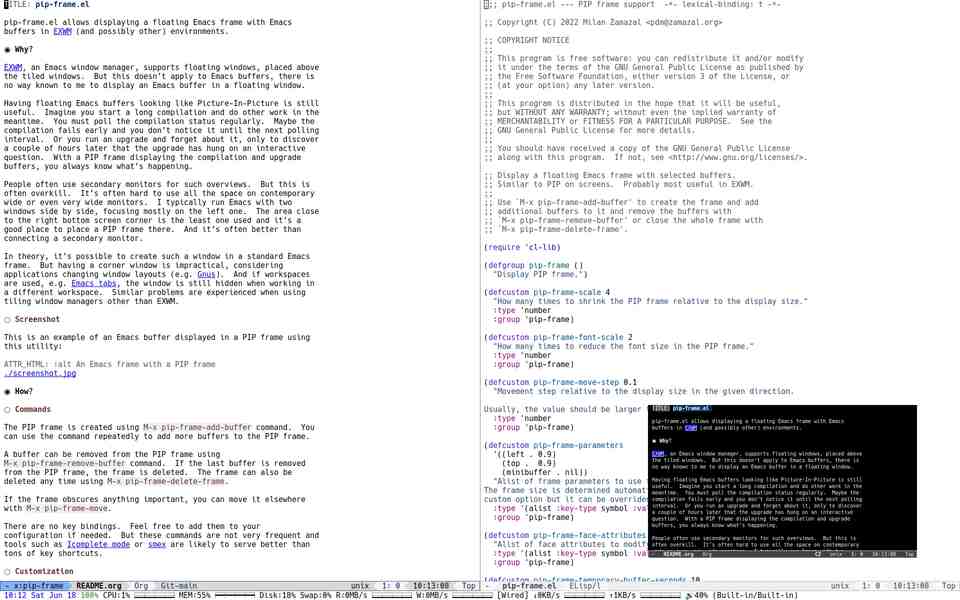 For manual installation, simply put pip-frame.el file to your site-lisp directory and add the following to your Emacs configuration:

The PIP frame is created using M-x pip-frame-add-buffer command. You can use the command repeatedly to add more buffers to the PIP frame.

If the frame obscures anything important, you can move it elsewhere with M-x pip-frame-move.

There are no key bindings. Feel free to add them to your configuration if needed. But these commands are not very frequent and tools such as Icomplete mode or smex are likely to serve better than tons of key shortcuts.

pip-frame.el is available at git.zamazal.org. You can file issues there.

If you don’t want to discuss things publicly or to bother registering at yet another web site, you can reach me at pdm@zamazal.org.